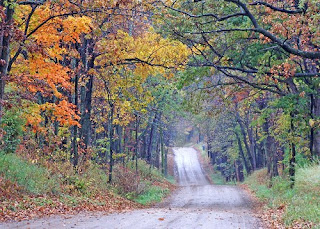 Seeing as it is fall - the weather is slipping into the chill side of life, the leaves are quickly changing, and the numbers of weekend interlopers have dropped off the the fall levels - which is to say, next to nothing. Another reason I love the fall.
Having started to get used to the absence of overly rude people (NOTE: Not all weekenders are so clueless, or rude, but en masse, they can be enough to make a girl say "If they call it tourist season, why can't we shoot them?") I was taken a bit off guard when tonight on my little journey to the local grocery store I ran into an unseasonably large influx of weekenders. 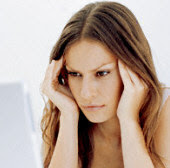 For reference, once Labor Day hits, there is usually a weekend or two of vacationers buttoning up their lake houses and putting in just a few more days of drunken blur. Once the temps drop, or it starts raining - they usually are totally AWOL. Which, if perfectly FINE.
I will say, there were a few people who were clearly from out of town that were quite nice in the store, though easily spotted as non-locals by their completely rushed manner of moving, speaking, and lack of patience to LOOK for anything.
On my way towards the register, I spotted them. The baby execs.... or, mini execs, whatever you prefer. Usually, they are not very intrusive travelling with a partner (though never spotted alone out here in the sticks lol) they are incredibly obtrusive when they move in flocks. Yes. I said flocks. Much like you see sparrows flying in flocks, fish in schools, and the Verizon wireless guy with his network. They easily blend in while in their native environment of places like ... 'Chicago' or the far off 'New York'. Here, well, they stick out. Picture if you will: Nice looking, clean cut, manicured, sweatervest wearing, pressed slacks & sunglasses. Now, add to it: one hand with their already paid for order (though now standing on the wrong side of the registers because someone was slow, and they can't wait for them - because they travel in flocks.)and the other texting madly on blackberries. OK. There's the look. Got it? Good. 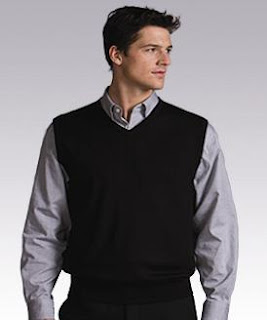 So, I head into the checkout lane, and reach into my cart to pull out the first of many things in my cart. Literally, the second my first item hits the conveyor, they unload their whole order within a few inches of what I was starting to lay out. WTF? Well, you know me. That won't fly.
I stopped. Turned around and in a very calm but very Kimi tone I say 'Do you have any respect for anyone else's personal space, or are you just an ass to everyone around you all the time???' Well, he started to say something about thinking I was done or some lame shit, and I let him have it with both barrels. I know that this was not something to blow about, but ya know, consideration is not high on these people's list of things to do before they die, which, may happen much sooner if they keep pissing off the locals. I'm just sayin'. We put up with the drunken idiocy all summer long. We pull their asses out of the fire when they need it - without thanks or being asked most of the time - but, when they start standing in your back pocket while you're in line, and expect you to rush because they have no patience? Oh, hell no. I do not have the internal censoring service that 99% of the population does. Nope. Sorry. That's what happens. So, there's my rant for now. Beware. Mind your manners, or I'll getcha.
Posted by Qtswede at 10:37 PM No comments:

Reflection on the Season (part 1)

Ah, fall. It is so officially fall for me now. All of the big landmarks have been met. The apples are ripe (oh, lordy, how I love fresh crisp apples and all I can do with them.) and the nicer farms in the area are picking them by hand, choosing the most ripe, juicy fruits and boxing them up in ridiculously large crates bound for cider presses, mostly. I am even now, plotting my trip to the orchard to abscond with a yet to be determined quantity of free apples. It's what I do. There is ONE tree in the whole orchard that bears Granny Smith. You can bet your bejeezus that me and that tree have a date before the cider boys show up. 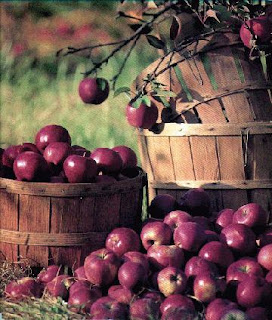 The leaves here are turning - have been for the better part of a month, but now the big maple tree outside of my front door has the prettiest little splashes of Sugar Maple Red popping up at it's crown, and some of the ends of the longer branches. The oaks are starting to turn golden, and the little patches of forest around here are starting to get really pretty. 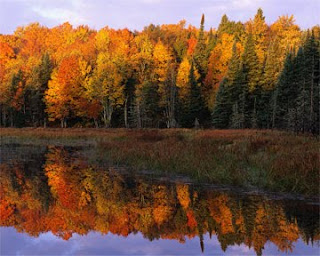 Lake Michigan is fighting off winter as best she can - arguing with the shoreline in massive proportions with the large fall storms starting to blow over her vast expanse. I always feel bad for the ore freighters on Lake Superior around this time of year. Neither lake is one that I personally would want to mess with, but Superior is .... well, Superior. Deep, vast, and dangerous. I hear she's fighting with storms and swells growing and crashing waves too. Nature's way of saying 'get ready kids, here it comes'. 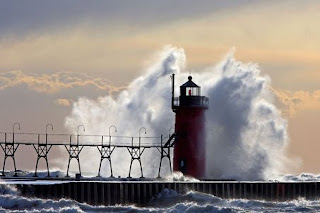 And before we know it, the end of October will be here, heralded by our precious kiddos. Dressed up for Halloween, begging for candy. I swear, this is going to be the year we have an old fashioned kid's halloween fiasco. I'm thinking bobbing for apples, hay ride, pin the nose on the pumpkin - all the oldies & goodies. Stay tuned. It's just getting started.

This weekend was the big apple picking party at one of our neighbor's orchards. This is a major event for them that they throw every fall. They invite their friends & neighbors from Chicago, and Michigan to their home tucked away in an apple orchard to celebrate the season, pick some apples, and have dinner. In addition to the general happy times, the past two years we have been invited to bring a pony over for all the kids to play with, spoil and get little pony rides from. This is great fun, and usually the kids need a little coaxing into getting on the big, snorting beastie... kidding. Our Champ is an old worn out fella that loves kids, so it's a perfect fit, but with kids that are not used to such congenial old fellers, he is I'm sure, a savage, snorting wild man. But, I'm paraphrasing here.
So, this year, our oldest boy came along to kick things off and ease the kids' minds. Of course, the best way to do this is to show them how we do it here in the 'sticks'. 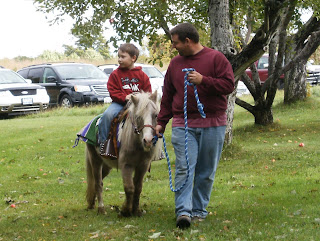 They were lining up like crazy. There must have been oh, 15 kids or so that took pony rides, some of them twice. There were a few more timid kiddos though that would come near, but were afraid to even pet the old man. This guy was NOT one of them. He sat with Champ on his 'break'. Right on the ground with me & Champ, petting him for a good 10 minutes. 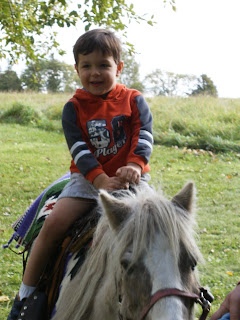 Of course, it was an apple picking party, and what group apple picking soirre is complete without a hayride? Well, they did those too. Hay ride to the larger area of apple orchard, and back to the house. The adults enjoyed it just as much as the kids, I think. 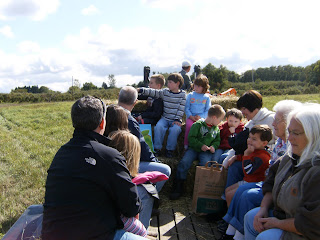 I didn't take the hay ride, though when I saw the pics of the kids playing and helping each other in the orchard, I kinda wished I had. That's alright though. Me & the other kids were busy with the pony. Look at these guys though. Picking up ones they missed, comparing sizes of the ones they picked. How cute. 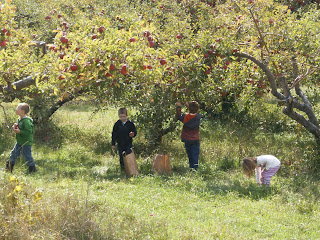 Then trouble showed up - with a capital 'D'. David. Two of them. Yep. That's my dad and my boy in the pumpkin get up. I think they're pretty cute together. Dad had been holding him for a while, sleeping - probably a good 20 minutes before he woke up, then it was a great game of pass the baby between my folks, me, and Larry. 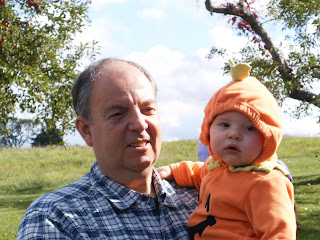 Davey LOVES Champ, by the way. Something about his cute little pony ears he just can't get enough of. He had a little ride too, but this was one of the best shots of him trying to get Champ's ear. 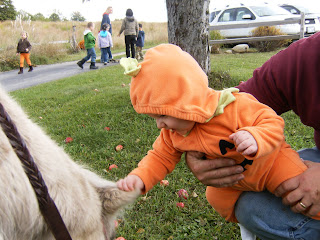 It wasn't long after this that Davey started to get a little cranky (probably because he had some joy kill telling him to not put the pony's hair in his mouth) Little Lar was galavanting around with a friend's son - Steven. They hit it off, and disappeared to the playground area together. They were pretty much inseperable all night. Mom left with Davey, and shortly thereafter Champ's duties were kaput, so we loaded him in the happy trailer and headed home - where he promptly started trotting around once I let him loose. Booger. Little Lar, Mom and I headed back to be friendly and have a bite with the group. Lovely way to spend a Saturday afternoon. Thanks, Bruce & Sandy - we all had a great time!!

Posted by Qtswede at 3:28 PM No comments:

Qtswede
I am a Jill of all trades. I was raised by carpenters, and have become one myself. I know how to build homes, read blueprints, operate heavy machinery & all forms of powertools. I also have a degree in Art, and a small photography business in addition to my horse work. OH, and 3 kids & a hubby too.